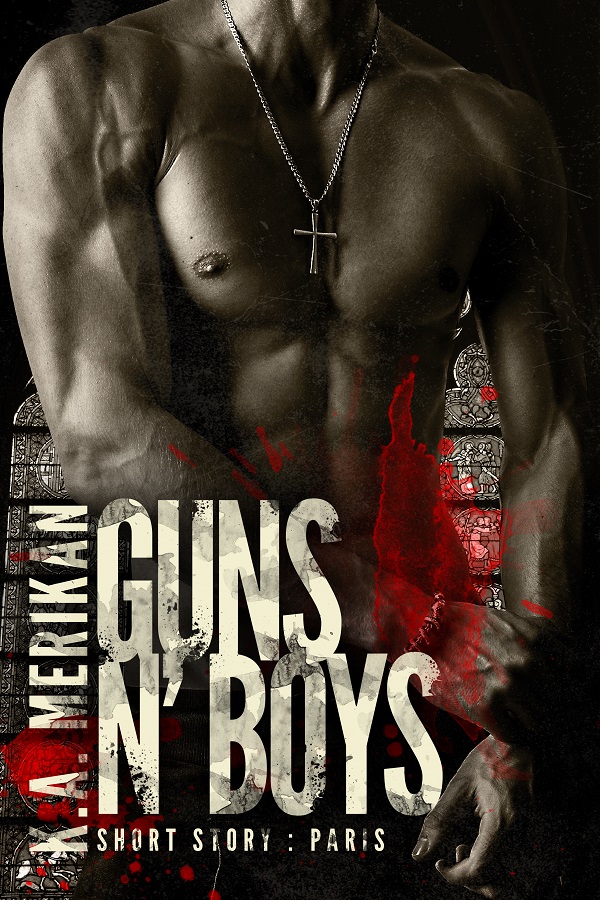 This is a short story special accompanying Book 1 of ‘Guns n’ Boys’. It doesn’t pick up after the end of Book 1, but is a story of what happened to Dom and Seth on Christmas Eve in Paris. Read about the series.

All Seth wants is a Christmas Eve to remember, with the man he loves. When Dom invites him to Paris, his dreams are about to come true. But the man waiting in the apartment they are to stay at changes the course of the trip. To Seth’s surprise, religion is a bigger issue for Dom than he’d thought, and it’s on a collision course with Seth’s atheism.

Their first Christmas together might end up memorable for all the wrong reasons.

Seth arrived at the airport with a small suitcase and a special box for the cake. He looked around to spot Dom, already anticipating the scent of his cologne and the sharp angles of his suit.

His blood stilled momentarily when someone casually took the box out of his hand. It was a relief to see the smiling face of Domenico when he turned on his heel.

Seth shook his head. “That’s all you care about? The cake?”

Dom looked elegant as usual, but Seth knew him long enough to know that it was Dom’s casual suit. Not to mention Dom’s hair was down.

Domenico grinned at him. “I don’t want it to get damaged. And we still have time for coffee before departure.”

“I think I see a Starbucks from here.” Seth pointed forward and pulled his suitcase with him. “I didn’t even have time to check what’s on in Paris now.”

But Domenico stopped him with a tug on the shoulder. “Could we go to the cafe in the tax-free zone? Maybe their Italian barista’s in?”

Seth raised his eyebrows. “Okay, I suppose. Are you on first name basis with him?”

Domenico scowled. “Not sure. Why?” he asked, already walking toward security.

The scowl on Domenico’s face was priceless. “No.”

“Oh, really? How do you know?” asked Seth even though he was sure Dom must have hit on the guy, or something like that.

“He’s handsome,” said Dom after they showed their boarding passes on the way.

Seth cocked his head to the side, unsure what to make of it. “You just hit on any handsome guy?”

Dom groaned and put his bag in the tray, along with his watch and a golden cross he always wore on his neck. “Oh, come on. It’s not that easy to meet a handsome Italian away from home.”

“Did he blow you?” Seth smirked getting in line next to Dom.

Domenico blinked, following the people ahead of them toward the metal detector. “Me? Are you kidding? I just… knew it from the way he spoke to me.”

“Oh yeah? Otherwise he’d be all over you?” Seth sniggered and walked past the gate without setting off the alarm.

“Are you really asking me that?” Domenico shook his head and walked up to his black travel bag.

Seth didn’t answer on the way to the cafe, but when they sat down in the dark leather armchairs, he didn’t have to ask to know that the guy they were talking about was there. The barista was a tall, tan guy with long curly hair pulled into a man bun Seth would love to slide his fingers into.

He licked his lips. “Yeah, I’d do him too,” he said just to spite Dom. And he succeeded.

“Why? Something wrong with me?” Seth smirked and pointed at his own body. He’d taken an extra effort today. Even wore a shirt instead of a T-shirt and had shaved clean to make Domenico proud.

“Told you he’s straight,” growled Domenico, though he was already smiling at the pretty waitress walking over from the counter.

“What if he weren’t?” Seth pushed on, but nudged Dom with his shoe.

“I would not allow it,” said Dom in a pleasant tone and turned to the waitress, ordering an espresso, and a large cappuccino for Seth.

It had Seth blinking, and he quickly called the waitress back to order an espresso with Baileys and whipped cream. He loved cappuccinos, but it weirded him out that Dom would just order for him, so he needed to make a point. Seth Villani was not predictable.

“You think you always know what I want?”

Domenico leaned back in the chair with his eyebrows raised. “You always order cappuccinos.”

“But I might change my mind anytime I want, so don’t just assume things. Do you have to control everything?”

Domenico pinched the base of his nose. “At least you haven’t changed your mind about the cake.”

“Nah, I made the cake.” Seth relaxed again and smiled. “Just don’t be a pig and wait till we get on the plane to eat it. You wouldn’t want Mr. Barista see you stuff your face with homemade cake, would you?”

Domenico’s face soured, but he quickly got back to his old self once he had his coffee.

“Keep the teasing to the shower room,” muttered Dom, whose eyes twinkled at Seth from above the white cup.

“I’ll consider that an invitation.”